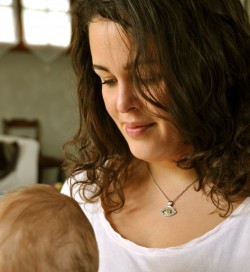 Next up in the series of The Global Differences of Baby-Making we are in France to hear my story about having my daughter abroad. I’ve not shared my story as part of this series so here it is!

My name is Ameena, I’m half Egyptian, half English, born in Dubai – that’s the abridged version! I have no clue where I am from but I am ok with that … kind of! I’ve lived in the UAE, Qatar, Oman and the UK including London, Manchester and East Sussex. My darling daughter BiP just celebrated her first birthday and she was born in Avignon, France.

When I first met my husband, John, we were both living in Dubai. We knew we didn’t want to have a family in Dubai so we had to choose between France, UK and Canada to start a family as, between us, that’s where we had passports. We chose France because of it’s excellent medical care. It was so much easier to have a family in France with all the medical support provided.

I always feel this is a double-edged sword! I was born in a foreign country where expats were the only people I regularly encountered. One year they were there, the next they weren’t. We moved around and I never had a place to call “home” – home became a house with our things. The transience was something I learnt to live with and I am cool with it all. I don’t think it’s that interesting to have had friends from all over the world but I guess it is. I understand a whole range of cultures without even trying. I hope that by having BiP in France she will embrace French culture and understand other cultures … I would also like for her to live in other countries should the opportunity arise!

I was terrified. I was truly 100% overwhelmed, terrified and did I mention terrified?? I spoke basic French and was usually intimidated by my doctors. I felt so alone and out of my depth! I sought solace in online forums … how I wish I’d discovered Twitter back then!

On the flip side, I did have excellent care when it came to my sciatica, which plagued me from wk 18 of my pregnancy. I was prescribed physiotherapy with hydrotherapy sessions to help me deal with the discomfort.

When I was 10 days from my due date I was prescribed home visits for a midwife to come check me and my bump every 48 hrs which was outstanding care. Every other day a midwife would come to our home and monitor both in inutero BiP and I. Amazing! I have yet to come across another health system that offers such care.

Since I don’t have a “home” country to speak of I guess I was mainly comparing to the US. It was a pretty silly thing to do as the differences were so vast. I bought loads of books from Amazon and poured over them. I browsed forums and got information that was only US applicable yet I dragged it to my appointments which annoyed my ObGyn … I became a sponge for information. I read, read and read some more.   I realised quickly that a birth plan was something to forget about … my ObGyn was excellent and very capable … especially BiP’s birth was everything I never wanted but perfect nonetheless.

One major issue was that the French consider a full term pregnancy to be 41 weeks, not 40 weeks like the rest of the world. It annoyed me so much! I still am not sure why they do that! I also gave birth is private clinic rather than in the hospital and I have made John promise that we will not move until I am finished with my baby-making chapter as my ObGyn, the clinic, the everything was really great!

On Breastfeeding
I’ve battled people with regards to breastfeeding in France. They seem to frown upon it, assume I am selfish or stupid (or maybe both) for doing it. It’s been an uphill battle to find support, especially as my French is not really up to scratch. My desire to breastfeed was so strong I shrugged off the people who said it was “Abnormal” for an 8 month old baby to be breastfed or the doctors who told me that breastfeeding past 6 months was only for the mother’s benefit! The biggest shock to others has been when I tell them I’ll wean when BiP wants to!

On Baby-Led Weaning
I’ve not even bothered to tell my pediatrician about how we feed BiP. Each visit I am given a handout on what BiP should be eating and I make a paper airplane out of it … it usually contains info about how much flour to add to a bottle of formula which is totally irrelevant!  The last time I mentioned BiP had an omelet I retracted my statement saying I misunderstood the question – the feeding schedule is very fixed in France and BLW has no place!

On Elimination Communication
The only thing I have been told is that babies are all incontinent until they are at least 18m old … my pediatrician prefers I take BiP to the park and show her the birds rather than put her on the potty. We do both.

Extra Care
During my pregnancy I was given 8 free pre-natal classes with a midwife, some were spent in the pool, some in the classroom. They covered topics from breastfeeding to breathing to dressing your baby to preparing your hospital bag. I’ve already mentioned the home visits. After having BiP I had a midwife come to our house to check up on us – I spent 6 days in hospital due to a 1:1000 allergic reaction to my stitches – the normal stay in hospital for a natural birth is 4 days in France. 6 weeks after delivery you see your ObGyn who prescribes 10 sessions with a special physiotherapist to get your pelvic floor strengthened. This is standard and very, very unsexy but fantastic in preventing incontinence and other complications following childbirth. I have yet to find another country that offers all of the above free of charge.

What advice would you give other mothers in your situation?
Do your research. Read. Ask questions. Make sure you know what your entitlements are and make the most of the system to ensure you have the best possible experience. Get a mentor, someone to support you through the journey. Becoming a mother is daunting enough without the added pressures of being abroad and having to deal with language and cultural differences. Make sure your partner is up to speed on what your needs are. I don’t think my experience would have been as positive without my husband’s support.

If you are expecting a baby in France or abroad and would like to talk to me please send me an email.