Next up in the series of The Global Differences of Baby-Making I talk to Erin who is American. She’s shares her experience of having her fifth baby in Sweden. Here is her story:

A native of Wichita, Kansas, I am on active duty with the U.S. Coast Guard.  My family and I have lived in various areas throughout the US, including Southern California, Washington, D.C., and most recently Valdez, Alaska, but this is our first time living abroad.  My husband and I have five children, ages 10, 8, 6, 4, and 3-months.  Our first four children were born at military hospitals in the U.S.  Our fifth child was born at the city hospital in Malmö, Sweden. 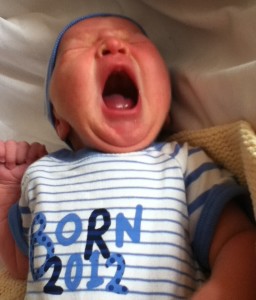 Why did you have your fifth son abroad?

I discovered I was pregnant a few weeks before receiving my military orders to Sweden in January 2012.  We certainly had the option to decline the orders, but for many reasons we decided to welcome the challenge and adventure with open arms. We moved to Malmö, Sweden with the Coast Guard in July 2012, arriving when I was 34 weeks pregnant with our youngest son.

Swedes are very proud of their socialized healthcare system.  The feel very strongly that their health care system surpasses the US, among other countries, by a large margin.  While many expats may believe that this would be the biggest benefit to having a child in Sweden, I already receive fully funded health care as a member of the military.  So, while I recognize this is not a benefit for me, it may be for others.

One benefit for me was living the experience of child birth in a different culture.  I was born and raised in the same Midwestern city and this was completely different from anything I have experienced.

Another benefit included setting my own pace for the birth of my son.  My previous hospital birthing experiences felt very institutionalized, meaning upon my admittance to the hospital, I was put in bed with an IV and 24/7 electronic monitoring of the baby by nurses and a doctor.  The Swedish system allowed me to progress as my body and mind allowed.  The midwife only monitored the baby with the monitor machine two or three times for 10-20 minutes each.  With the exception of my first child, all my births progressed similarly, coincidentally.

A week after the birth, I was directed to visit the local pediatric clinic with my baby.  Visiting the midwife at the Barnvard Centralen (a neighborhood pediatric clinic) was a nice touch.  I could discuss many things with her regarding my baby, me, concerns regarding our recent move, and how the Swedish system worked.  Nearly everyone speaks English which was especially helpful.

I felt challenged to be flexible and completely accepting of the “Swedish” way.  The Swedes are pushy in a passive sort of way, meaning that when they “suggest” you do something, they are really telling you that is the way it is to be done.  So, when the midwife (at a clinic that I did not seek care) told me to call her between 0800-0830 and I called at 0836, she would not talk to me until the next day.

It was frustrating and difficult to arrange for pre-natal care because I did not initially have a Swedish personal number, the equivalent of a social security number, and I was looking to start care at 34-weeks (even though I had received pre-natal care in the US) – and found care by 38 weeks.  The only clinic willing to help me get access to the socialized system was Mama Mia.  The midwife for my prenatal visits to Mama Mia was exceptional.  She was warm, welcoming and accepting of my situation and even created a temporary personal number to ensure my information was prepared for my labor.  She was a tremendous help in entering my information into the Swedish system, which made my hospital admittance that much easier, and assisted greatly with post-natal care.

The hospital staff was hesitatingly welcoming.  Although my water broke 8-hours earlier, they did not want to admit me because I was not having strong and consistent contractions.  In the US, I would have been admitted immediately with a delivery expected within 24-hours.  In Sweden, however, they wanted to give me up to 3-days to deliver once my water has broken.  I did not know this little bit of information until my water broke, which made the waiting especially frustrating.  However, they admitted me since this was not my first pregnancy.

Well, yes, and where to begin?

First of all, while in labor (the wrong time to ask), I asked about pain relief options – specifically regarding epidurals.  I had epidurals with my previous kids (with minimal success).  In Sweden, very few mothers request an epidural especially after their first childbirth.  As the contractions grew too strong to talk through, she casually mentioned that women use happy gas – which I gratefully accepted!  It was just the right amount of relief.

All deliveries are accomplished by a midwife unless there are complications.  Our midwife was very good and seemed experienced.  My son had the umbilical cord around his neck, which she handled quickly and with ease.

Circumcision is not allowed in Sweden.  According to some, it is “being talked about” but no real progress is being made.  My insurance company realizes this, so they fund travel to the nearest Military Treatment Facility (in Germany) when the baby is 6-months old for a circumcision if we so desire.

Finally, our parenting choices are quite different.  Swedes generally don’t have more than two kids.  We chose to have five children and receive many stares from the locals when we walk around the city with our clan.  As Americans, we tend to be a bit louder in public than the quiet, reserved Swedes.  The saying is that loud people are either drunk or American!

Be flexible and open-minded to their culture.  Remember that thousands of babies have been born following their beliefs, culture and system.  It may not be exactly what you expect or have experienced, but be realize their perspective as well.

Definitely visit the hospital and go to a Swedish midwife prior to the birth – Mama Mia was excellent.  If anything, this will get you into the Swedish system and make things much easier once you go into labor.

Ask any and all questions without hesitation.  You need to feel comfortable with your pre-natal care, labor & delivery, and the care to you and your baby following the birth.  Research the differences between your home country and Sweden – such as vaccinations.

Push the system to meet your needs.  My son was tongue tied and needed a very simple procedure done on his tongue.  It took two weeks to get an appointment scheduled (we received the appointment information by mail) and the appointment was scheduled for two months later.  We figured this would not be a problem.  However, at that point, he was 3 ½ months old and had established a weak feel for nursing.  Soon after the procedure, he rejected nursing and is now only bottle-fed.  If you have a concern, don’t wait like we did with our son’s tongue.  They may be willing to get you an earlier appointment.