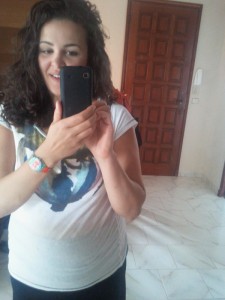 Today was an event! I got back into some pre-pregnancy clothes (admittedly stretchy ones as I am still a little way off my pre-pregnancy weight)!

It made me think about how depressed I have been about by body since giving birth 11 months ago – I am by no means happy with my reflection now but I am happier than I have been.

Realising that I am not alone I thought I’d share some of my true confessions relating to body image in the first year. 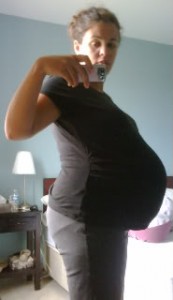 1. My  bump was flattering! My bump was so huge that the rest of me looked small. I was really pleased with myself that I had only gained about 12kgs/26lbs – now I say about because in all honesty I had no idea how much I weighed when I got pregnant so I rounded up a few kilos as I was a bit over my normal weight to start with (don’t judge me) and then stopped weighing myself at around 8 months. So the exact figure is probably considerably higher.

2. Breastfeeding does not always help you lose weight! Contradictory to popular belief and propaganda available in midwives offices around the world, breastfeeding may burn 500 calories a day but if you were like me it makes you hungry and it is possible to consume that in one meal! I clung on to stories of people who’s weight melted off like the butter they enjoyed consuming during their pregnancy. I however, clung to every damn kilo – losing at the same rate as BiP gained. It was incredibly frustrating as I was yet to find a 12kg/26lb 6 month old baby anywhere on the growth charts at the pediatricians office.

3. I wish I’d bought nice “fat clothes”! As soon as BiP was born I rushed to try on some of my pre-pregnancy clothes – WHO was I kidding? I got depressed and put my maternity stuff back on. Then the weather warmed up and I had nothing appropriate for summer in my size so I went shopping. I bought myself cheap ugly clothes that were comfy because I kept telling myself “I’ll be back in my old clothes before the summer’s end” – ummm …roll on autumn and I had to go get yet another new fat wardrobe – I did the same thing again because I was convinced that by 6 months I’d have lost the weight. Reality bites! Most of the clothes ended up in the bin because I wore them so much and some I am STILL wearing. Massive fail on my part. Now I am planning to get myself some nice clothes so at least I can embrace (or at least try to) my current shape.

4. I avoided skinny mother’s but stalked them online. I made the fatal mistake of stalking facebook photo’s of friends who had babies before and after me in the hope to find a chubby mother, ANYONE who was still in the same position as me … instead I found them in bikini’s with their 3 month old babies … A BIKINI!!!! If I was to put on a bikini at 3 months post partum Greenpeace would have been alerted that there was a beached whale an hour inland.  These images made me green with envy. They clearly had surrogates I told myself.

5. I spent a fortune on make-up! Mascara and lip gloss can make you feel a lot better about yourself even if at times I felt like putting make up on was like putting lipstick on a pig. Don’t forget the concealer.

6. I avoided the camera for months and regret it. I have to admit that I hated having my photo taken – I didn’t want BiP to have this fat mother in her album. I was so incredibly stupid. I’ll never get those days back. Get creative with camera angles and CROP is the most important part of any photo editing software.

7. I sold (almost) all my pre-pregnancy clothes. I couldn’t take seeing the clothes that I used to fit into in a previous life, ok, I hadn’t worn them in the year before I got pregnant but still they were an evil reminder of what I once was so I sold them. I decided that, if, I ever get back to that size again they will be out of fashion – or maybe that was a bad move and they could have been considered vintage. Anyway, I hated the reminder so they’ve gone.

8. I played with the bathroom scales. I’d get on the scales and be horrified at the number that appeared so I’d shift my weight around and try again with my heels hanging off the edge. Of course, they’d rarely change and sometimes I’d just get a big E signally an error. I then would try to convince myself that because I was breastfeeding each breast weighed 5kgs (10lbs or so) … whatever!

This is not the first time I have talked about post partum body distress – here are my tips on how to handle it (even if I don’t always take my own advice!) I’ve avoided talking about diet and nutrition because everyone is different. I personally have a gluten-free diet and watch my carb intake, limit sugars etc … I know what I should be eating and my diet is pretty good considering what most people eat – it’s a whole new ball game when it comes to post partum weight loss so I’ll leave it at that.

So, there you have it – my 8 confessions relating to my body image on the day that I wore some clothes for the first time in 18 months. What are yours?