Never before has a book grabbed my attention as Go the F**K to Sleep by Adam Mansbach.  A carefully crafted “unintended” viral marketing plan was elegantly executed. PDF copies of the book were “leaked” catapulting Mansbach’s children’s book to the top spot on Amazon before it was even published. Impressive. Add the word f**k to a children’s book and you are on to a winner it seems. The fact is, this is NOT a children’s book. It just looks like one – it was marketed, until it’s release, as a children’s book – very clever! Now they have they have released a free audio version of the book narrated by none other than Samuel L Jackson guaranteed to be a cult classic eh? 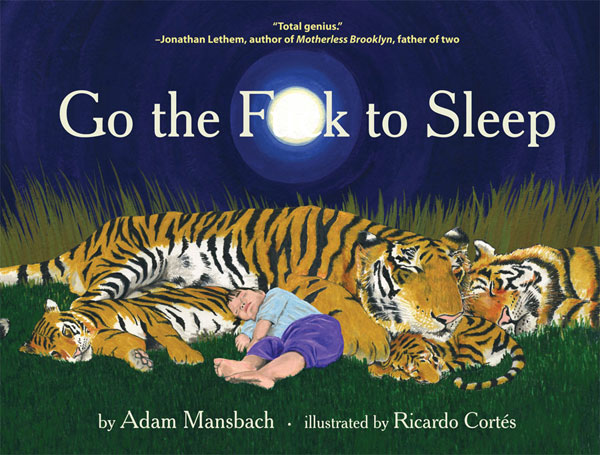 So what is it about?
It’s a book for parents about the trials and tribulations of trying to get kids to sleep. It’s written and illustrated in the style of a children’s bedtime book.

What did I think about it?
For me, it’s the story that  surrounds the book that is incredible. The hype, and the instant cult classic for me, is amazing.  I love the F-word – I really do. I use it frequently as verb, a noun and an adjective BUT I rarely write it. I am not even sure why. I love the descriptions and the rhythm of the verses in Go the F**k to Sleep – they flow, they are rich and then you are hit with the F-word which after the first 2 pages get’s old and actually very irritating. At some points in the book I find myself getting annoyed, and perhaps even slightly offended, which for someone who LOVES colourful language is saying something!  Even in the moments of high desperation and extreme tiredness I don’t think would articulate my sentiments in the way that was published, well, at least not with my own child:

“The tiger reclines in the shimmering jungle.

The sparrow has silenced her cheep.

Fuck your stuffed bear, I’m not getting you shit.

The illustrations by Ricardo Cortés are rich and very cute – they are so attractive that BiP enjoys looking at them making it hard to remember that it is a book for adults, NOT children.  It definitely throws you out of your comfort zone, it is uncomfortable, it is funny in parts, but it is over the top.

Parting words …The title was probably all it needed to be an instant success … maybe a couple f**ks in the book would have made it punchy and funny – instead it comes across as forced and overly deliberate. The humour is lost with the excessive use of expletives. Honestly, if you find the F-word that hilarious then maybe you need to grow up a bit.

I do not regret buying it – I am happy to have been part of this whole hype but I would say I am disappointed slightly!