This week we go to the UK as part of the series of The Global Differences of Baby-Making. Deborah has two sons; one born in the UK and the other, in her home country, the US. She talks about the challenges of having a baby so far away from family and friends, the taboo that is natural childbirth and glamour of driving a mini-van. Here is her story: 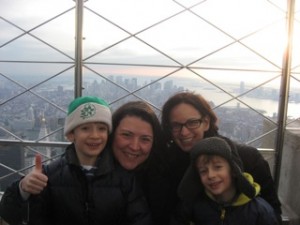 Deborah and Gabriella with their sons Asher and Levi

Tell me a bit about yourself? Where are you from? How old are your children and where did you have them?
I’m Deborah Goldstein, freelance writer, columnist for Patch.com and mother to 7-year-old Asher and 4-year-old Levi. I’m a Gemini married to a Sagittarius, which seems to work out ok. My partner Gabriella and I have been together 17 years, and we still like each other for the most part. I was born in New York City, spent most of my childhood in the suburbs outside of Chicago, gave birth the first time around in London and now I’m back in U.S. driving around the glamorous suburbs of New Jersey in my mini-van.

Why did you have your children abroad?
In 1999, my partner Gabriella and I started itching to travel. We decided that we’d move overseas wherever either of us could find work. Her company offered her a job in London, and we lived there for 7 years. We had our first child at the Royal Free Hospital’s birth centre in Belsize Park in 2003. In 2006, Gabriella’s company offered her another job in NYC, so we said, “Toodle pip!” to the UK. Our 2nd child was born at the birthing center at Roosevelt Hospital in New York.

What do you feel were the benefits to having children abroad?
Because our first birth experience was abroad, we had no point of reference. Having given birth in the U.S. the second time around, I’ve looked at birth from both sides now as the song goes. My first child kicked a hole in the placenta at 35 weeks, and my 33 ½ hours of labor followed. I am confident now that doctors would have pushed me to have an unnecessary C-section had I given birth in the U.S. They would not have tolerated such a long labor with a premature baby. Our local hospital St. Barnabas in New Jersey is topping the C-section charts at 49% of all births. 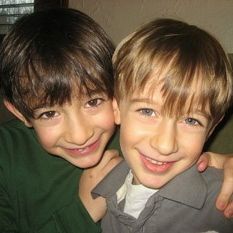 As an expectant mother abroad how did you feel?
You know how you buy an old house to fix-up because it has so much potential, and then you come to the conclusion that potential is really expensive and stressful and you vow never to do that again? But you didn’t know what to expect when you bought that house, and your contractor told you it had such good bones, and your vision of what could be was so very idyllic. We had no idea what to expect which was probably a good thing. Expecting a child for the first time was a similar experience. We romanticized our life with baby and looked forward to becoming parents. Neither one of us ever imagined how difficult it would be to parent without the support of friends or family. Those months of sleep-deprivation made the first trimester of flat-on-my-back morning-noon-and-night sickness look like a doddle.

Did you encounter any opinions that would have been different in your home country with regards to your pregnancy or parenting choices?
The medical system in the U.S. teaches pregnant women to be afraid of pregnancy and birth, and doctors convince us to trust the medical establishment over our own bodies. They aren’t completely to blame when insurance companies have got them by the short hairs. Doctors would much rather perform surgery they can control rather than leave birth up to nature. And then there’s the issue of pain. Women in the U.S. will do anything to avoid what they’ve been taught is unbearable pain. Look, I won’t lie and say that it wasn’t painful, but I think the unfamiliarity of that kind of pain is what’s most shocking the first time around. Think about the first time you experienced any kind of pain like stubbing your toe. It still hurts when you do it again, but you are familiar with the sensation, and it’s not as scary. When you recognize what’s happening to you (and one child has stretched you out sufficiently), the pain is not nearly as significant the next time. When I tell other mothers that I gave birth without drugs, they look at me like I’ve got a tail growing out of my ear. Would you believe that it’s easier to tell people that I’m gay than it is to discuss birth? In the U.S., I am fairly closeted about my birth choices.

What advice would you give other mothers in your situation?
You are your own best advocate. Do some reading. Trust your choices. And always accept help from others. And, as a wise friend told me regarding the many mistakes we think we make along the way, your children grow up in spite of you.