Next up in the series of The Global Differences of Baby-Making we go to Belgium to hear Yvonne’s story about how she had her son abroad. She highlights the differences between the care and practices in Belgium vs. her native country, Germany. 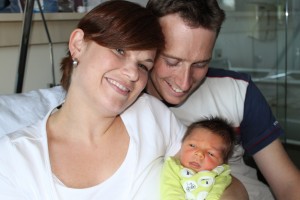 Yvonne and her husband with newborn Lennert

After having a long distance relationship for about 4 years, I moved to Belgium in 2001 after having finished my studies in Germany. We moved in together and despite all warnings everything went very well. We got married in May 2009 and I got pregnant a little bit later. I gave birth to a wonderful baby boy on October 8th 2010 in Veurne, Belgium. So Lennert is now 7 months old.

Why did you have your son abroad?

I’ve lived in Belgium for the last 10 years. My life has pretty much shifted to here. I still visit my parents and friends a lot. We travel to Germany at least 5 times a year and with the baby even more often. Still, the fact to have my baby in Belgium was never questioned. I have a gyn that I trust a lot, I wouldn’t want to go back to Germany to deliver the baby with a complete stranger. Furthermore, I didn’t want to quit my job earlier, just in case. I worked until 2 days before I delivered Lennert (I was induced due to high risk of pre-eclampsia). Also, my health insurance is in Belgium and wouldn’t have paid for a birth abroad, if deliberately chosen.

Lennert with Yvonne minutes after being born

As opposed to Germany, I had an ultrasound every check-up. My friends tell me that in Germany they do only 3 ultrasounds during the whole pregnancy. Furthermore, in Belgium measuring the neck transparency is standard whereas you have to pay for a supplementary examination in Germany, which isn’t covered by health insurance. This was in the end extremely important as the gyn measured a thicker neck transparency during my 12-week check-up. He immediately took action and 2 days later I had a Chorionic villus sampling (CVS) which turned out to be just fine! Until this point in my pregnancy I had never heard of CVS.

A huge advantage of the Belgian system is that the health care providers pay prenatal and postnatal counseling by midwives. So I found a wonderful midwife who came to our house a few times when I was pregnant. I wanted to stay at home as long as possible when going into labour before going to the hospital. She was supposed to be around and tell me when I should go to the hospital. In the end, I was induced and this part of my birth plan did not happen. Still, she came regularly after I’d gone home and checked the wellbeing of the baby but also mine! I don’t think anything like this exists in Germany.

I don’t think I would have felt much different than being in Germany. Everybody was positive and as I’m fluent in Dutch I didn’t have any language issues either. 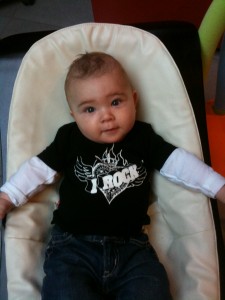 In Belgium your maternity leave is 15 weeks. You have to take at least one week before your due date and maximum 6 before your due date. Every week left, you take after delivering. So I opted to work until the last day and stay at home for 14 weeks before returning to work. In Germany things are very much different. Pregnant women stay at home at least 6 weeks before the ir due date and don’t return to work for ONE YEAR! At least, most of the time it’s more like 2 or 3 years. So when I told my family and friends in Germany that I would return to work after 3 months, I got a lot of eyebrow raising and that look that tells your “what kind of mother are you anyway”. Well, I didn’t have much choice. Although some friends told me to just quit my job. It was my time to raise my eyebrow then. I really love my job, I couldn’t imagine just stopping my career and being a stay-at-home mum. Please don’t get me wrong, there is nothing wrong with stay at home moms. It’s just not right for me! And yes, it tears me apart every single day when I bring Lennert to daycare. And getting home or picking him up is still the most favourite moment of my day. And I see that the cultural difference makes me look like a bad mom in my friends’ eyes, but I know that I made the right choice for me.

Returning to work so early makes it sometimes difficult to keep up breastfeeding. Most mothers stop breastfeeding when they return to work after 3 months although you are entitled to pump until your baby is 9 months old. I chose to pump. Which made some of my colleagues and friends raise their eyebrows (again..). Why would I do that, they asked. Well, because although I’m a working mom, I’m committed to give my boy the best I can. And if this means sneaking out twice a day to pump for half an hour, planning pumping time around meetings, pumping in the car when I have a meeting elsewhere, well then it is like that. I had to contact the HR department several times as the lactation room was not what it should be in the beginning, but now I’ve got a fridge, a light sign when the room is occupied and an agenda to “book” my pumping times. I hated to be the nagging pumping mom, but I hope that with the alterations, more moms will stay breastfeeding after they return to work. Obviously that are issues I wouldn’t have encountered in Germany as I would be home with my baby.

I always told my husband that I wouldn’t bother standing up for my pregnant belly or my baby. When going into the hospital to have the baby I knew I would have it our way. I wasn’t going there to be everybody’s darling. I was there to deliver a baby the way I believed was best for him (underwater, no drugs). So get as much information as you need and don’t be afraid to stand up! My gyn is fabulous but I would have considered choosing another one if he wouldn’t be alright with my choices.

It doesn’t matter where you are, I think that moms know best what is best for them and the baby. Ask advice if you are unsure about something but trust your intuition. It’s your baby, it stayed in your belly so you know your baby best and you will know what will work for you as a mom and for your little family in general.