As great as ECing is, I have to admit that, there are times when you just want your baby to go in their diaper. When it’s all going well, this, can be, confusing to your little one. Yesterday I was talking to a friend about ECing and I started thinking of the incidents we’ve had with BiP where ECing has actually backfired.

Not under the table! 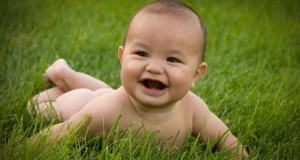 BiP has made good use of gardens and fields, which is not really embarrassing until she poops (rather than pee’s, as you wrongly assumed) under the table in the garden whilst having aperitif at a friends house!

Poop, a car park and a sandal!
About 6 weeks into ECing BiP we were out in a posh village and she was fussing and being totally “off” when it clicked what she wanted to poop! I tried cueing her to go in her diaper but this just enraged her further so we decided to head back to the car. I whipped off BiP’s diaper and held her in the bucket hold between the cars and she instantly pooped! Just as I was about to get a bottle of water out of the car to wash away the mess the couple who were parked next to us returned!!! Before I could say “Attention!” (“watch out” in French) the lady stepped in it! I was mortified! (Now, before anyone says anything, the streets in France are decorated in dog poop so personally, I would rather step in breastfed baby poop than dog poop!)  I then vowed to travel with a potty in the car from that day on!

Hey! The potty sucks but this rug will do!
Recently BiP decided that the potty was uncomfortable at Grandma’s and pulled herself up on to the coffee table and promptly peed on the rug. During diaper free time at home she chooses to get off the potty and pee on the tiles and then proceed to slip and fall … or if she does actually poop in her diaper it becomes a huge ordeal with her crying her eyes out even when she has been changed.

So, whilst I love ECing it certainly has its downfalls! I am hoping that when she starts walking things will be easier but I am sure I will have more stories to tell!

58 Responses to When Elimination Communication Backfires