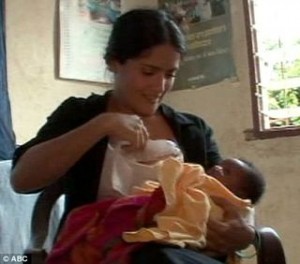 How you feed your baby is a personal decision only you should make for your child yet whatever method is chosen there will be debates.  Bizarrely, breastfeeding, which has been the nourishment of choice since time began, has become a controversial issue.  This week Gisele Bundchen said that there should be a law forcing mothers to breastfeed for the first 6 months of their child’s life. Whilst I do not agree with this notion I think the virtual flurry of debates it has provoked can only be a positive thing. Perhaps the more celebrity’s who speak out about breastfeeding the more new mothers will be encouraged to start – maybe a more radical stance is what is needed to get people really talking (and hopefully breastfeeding).

When Salma Hayek spontaneously breastfed a baby in Africa there was a media frenzy debating herintentions behind her actions. In my mind it seems quite logical – hungry baby + breast with milk = feed hungry baby! Her actions, selfless and caring, were twisted and construed as a publicity stunt some even suggesting that it would have been more appropriate to offer the baby formula or express the milk into a bottle first. What is with this idea that the breast is distasteful or unsanitary? Are breasts just for exposing in the bedroom, in strip clubs and the French Riviera? Have we forgotten the real reason why women have breasts?

From my own experience breastfeeding my baby has prompted numerous questions and odd looks from those around me.  I’ve been asked why I am breastfeeding and that surely it must be such a pain for me to do so. I have even been told that formula is far better for my daughter than my own breast milk. Now, whilst I do understand this may be the case for some women this is not the case for me.  I have been asked how long I intend to breastfeed for to which I have started lying in order to stop the jaws dropping when I say “I hope at least one year”. Its even been assumed that I breastfeed for fun and now that my daughter is 3 months old I should put her on a bottle. Hmmm … after 6+ weeks of cracked nipples, sore breasts and all the other aches and pains I’ve just got the hang of it so I am not quitting now!  I never anticipated such interest in what I did with my breasts.
Interestingly, just one in five women who start breastfeeding (which is less than 60% in the US) continue to breastfeed for 6 months despite it being a recommendation from the WHO.  Whilst I understand that there are a number of factors which influence a women’s decision to formula feed their baby the debate is certainly a lot more reserved. If anything, formula feeding has become the accepted norm and breastfeeding is the taboo.
At the end of the day, whist I support any celebrity attention breastfeeding gets, especially if it encourages more women to do it, I am yet to fathom what it matters to anyone else what I do with my breasts (or what you do with yours!) ← The Art of Breastfeeding – the early days
The youngest guest at Le 111! →

5 Responses to Who’s breast is it anyway?