Next up in the series of The Global Differences of Baby-Making I talk to Danielle who is Canadian and had her daughter in the USA. Here is her story: 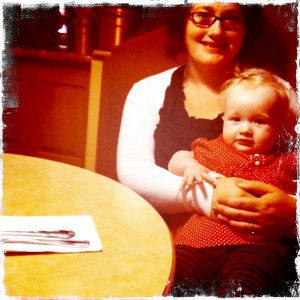 My name is Danielle, I’m 34, and Canadian. I married Matthew, an American, while we were both studying in Canada, and that’s where I gave birth to our first daughter, Alyce. Matthew was offered a job in Delaware and we moved there when Alyce was 8 months old. We were still living there when I became pregnant with my second daughter, Shira. We have now all returned to Canada where we hope to make our home. Alyce is now 4 and Shira is almost 2.

If I’m being honest, I don’t think I would have ever said that I wanted to give birth in the U.S.A. As a Canadian I grew up feeling very proud of our universal health care, and I just didn’t know what to expect with the American system (I had never even seen a medical bill before). Fortunately we had insurance and were required to pay for only a few small services during my pregnancy. We found an birth centre with outstanding midwives, where I was able to have a water birth. Shira was born an American in May 2010!

I think things would have been different if had been my first pregnancy, but since it was my second, I was able to relax a bit more about the entire thing. Without this experience I think I would have worried a bit more about being so far away from my family. The one real concern for us was not having family close by to offer support around the time of Shira’s birth. It was difficult finding people who could look after Alyce during the birth, and this caused me a lot of stress. We tried to coordinate visits from Canada around when we thought I’d give birth, but of course those plans never work! I was eight days past my due date when I finally went into labour, the day after my mum had to fly home. And it was a bit lonely at first, after her birth, not having anyone around to celebrate her arrival. We had lots of visitors a couple of weeks later, but it was isolating at first.

In Canada I had a midwife-assisted birth in a hospital with Alyce, but this time around we had wanted a home birth. It turns out that home birth was not available in Delaware, so we were completely out of luck. We found a great birth centre and things worked out in the end. I called the midwives when I was four weeks pregnant, hoping they’d take me on as a client, because in Canada women are used to being turned down because they are too busy. This was not the case in Delaware! My American midwives were also more hands-on than I was used to in Canada. I was given more tests and had more routine examinations than I ever did when I was pregnant with Alyce. And breastfeeding–that was different! When I first arrived in Delaware, still nursing my 8 month old baby, I didn’t see another nursing mother for miles. I would nurse everywhere and anywhere (including Target). Once Shira was born I was starting to see more nursing mothers.

Work hard at building a community, because it makes all the difference. I didn’t have family, but I did end up joining a mother’s group at my birth centre and it made all the difference. I met wonderful women who, among many other things, could help explain some of the details of the American health care system!