Next up in the series of The Global Differences of Baby-Making I talk to Nancy who is Canadian and had her first daughter in the USA, and her second in Egypt. Here is her story: 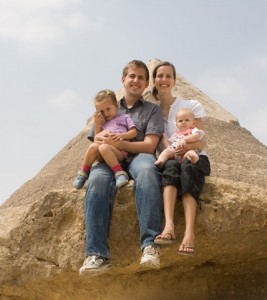 My husband was attending graduate school at the American University in Cairo when I became pregnant with our second baby. Since we were living in Egypt that’s where our little one was born. Our other two children were born in the States also for the simple reason that we happened to live there when they were due.

I think cost is a huge factor—having a baby in Egypt was far cheaper than having a baby in the United States. We knew all of our costs up front and even chose our hospital room based on how much we wanted to pay. We were completely unsurprised by the total when we received our bill. I think in the United States a lot of new parents are shocked when they get their bill in the mail, whether they have insurance or not. It was nice to not have to worry about whether we’d be able to afford to have our child.

We’ll also always feel so connected to our children’s birth places, including Egypt where we don’t have citizenship, because the birth of a baby is such a momentous milestone—almost like the ultimate souvenir.

I was nervous at first because in Egypt we were so far away from our family but I was friends with one woman who had given birth in Egypt and she introduced me to several others and all of a sudden I had a full circle of friends giving me advice and courage and strength. I did feel a little conspicuous walking around with my big, pregnant belly toward the end of my pregnancy because not a lot of Egyptian women seem to leave their house when they’re pregnant—there are so many children running around and so many babies being carried in baskets and on shoulders but I rarely saw any pregnant
women.

I think one of the biggest factors for me right now are my pregnancy cravings. I seem to always want things that I can’t have—for example, I’ve been craving dill pickle chips but they don’t have those where we live, though they are very popular in Canada. In Egypt I aways wanted peanut butter and that’s hard to come by there!

Did you encounter any opinions that would have been different in your home country with regards to your pregnancy or parenting
choices?

I was handed a pamphlet about breast-feeding by a friend and inside it recommended that, if you veil, you should take a vitamin D
supplement. I had never thought about that before because I don’t veil but I thought it was a good point. I think the biggest thing that I noticed was that everyone around me was always very concerned about the temperature of my children—whether they were too hot or too cold. They would scold me for not having socks on my infant when it was boiling hot outside. My
pediatrician though was very understanding of Western traditions and never criticized my parenting techniques, which was nice of him.

The whole delivery went much differently than I expected as well. The nurses kept trying to get me to lie down, which I didn’t find comfortable, but having me sit up was making them uncomfortable. It ended up being a fine experience but the cultural differences were very frustrating at the time. My birth story can be found on my blog.

If you’re far away from family, or even if you’re not, make an effort to connect with other young mothers in your area who can recommend doctors and midwives and hospitals. I got so much good advice and made some wonderful friendships that I don’t think I would have made otherwise. It was so nice to have a support group of women who were going through the same thing that I was—raising children is difficult no matter where you are in the world.

You can find out more about Nancy on her blog

2 thoughts on “Having a Baby Abroad – Global Differences Series: EGYPT”