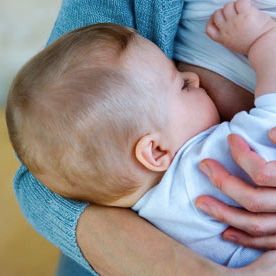 The World Health Organisation (WHO) states that exclusive breastfeeding for the first 6 months of life is recommended and breastfeeding for 2 years (with the introduction of solids from 6 months) is beneficial. So, when I came across Sarah Boseley article in the Guardian Newspaper today entitled  “Six months of breastfeeding alone could harm babies, scientists now say” I was (almost) lost for words!

The report, published in the British Medical Journal, states that “doctors from several leading child health institutes say the evidence for the WHO guidance was never there – and that failing to start weaning babies on to solids before six months could be harmful.” The study however, does exclude baby formula, positioning it as a healthier option in terms of aquiring a balanced diet for a baby under the age of 6 months.

Whilst I am pro-breastfeeding, and I honestly do not care how someone else feeds their baby as long as their baby is fed, I do take great offence when someone tries to imply that I am doing my child wrong by feeding her the way nature intended! Justification for this report comes in the shape and form of deficiencies and food allergies all of which begs the questions – how have they managed to collate such data considering clinical trials on babies are unethical and therefore do not exist? A study based on empirical data alone is clearly flawed! Who paid for this study to be conducted? Breastfeeding certainly does not fit in with mass consumerism … baby formula companies despise breastfeeding women because, once they’ve breastfed for 6 months the changes of them converting them to become a customer is almost impossible.

Waiting until 6 months to introduce solids is based on a range of physical factors; 6 months is the average age a baby can sit unassisted and therefore, safely swallow food. The gag reflex is moving further back in the babies mouth (a reflex designed to PROTECT a baby from having anything other than milk) which means they can readily accept solids. But hey, what’s the big deal? A baby isn’t a person right? They should be force-fed before they are physically ready because that’s what reports say!

So my parting questions are: If exclusive breastfeeding for 6 months is indeed harmful how, since the beginning of time did we survive without purées, rice cereals and formula? What about the fact that breastfed babies are sick less often (despite the implied iron deficiency in the report?)

Many breastfeeding women come up against a number of obstacles, personal and physical during their breastfeeding journey, with little support (in my case especially) but we persevere, cherish and embrace it because we rely on something that no study can ever quash … a mother’s instinct.

102 thoughts on “Exclusive breastfeeding until 6 months is NOT harmful!”