This week I talk to Claire who is English and has 2 daughters, both of which, were born in France as part of the series The Global Differences of Baby-Making. Here is her story:

Tell me a bit about yourself? Where are you from? How old are your daughters and where did you have them?

Hi, my name is Claire, I am currently 45 years old. I moved here with my then-boyfriend at the end of 2004 with no idea we would still be here and married in 2021! I had my children a while ago they are 9 and 11 now, but they were both quite different birth experiences that might be helpful to share. We are both English and have been living in France for 16 years now, 5 years at the time of our first child. Both of the girls were born in France and have always gone to the local school in the village so are bi-lingual. 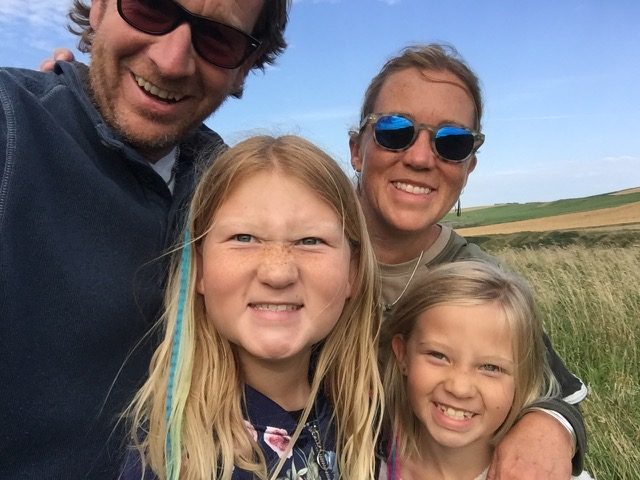 I studied embroidery at university and create beautiful (if I say so myself) felt wall hangings. As these sadly don’t pay the bills yet I am also a chef for private clients, weddings, and large corporate events. Since last march and the ‘new-world’ we now find ourselves living in where events don’t happen I have had to get creative and diversify so I have started a sock website.

We were living here, and it never occurred to me to go ‘home’ to have them.

I have never had children in another country, so have nothing to compare it to. After talking to friends back in the UK and their experiences I would say the postnatal care in France is better. I was surprised there were no NCT equivalent groups here, I thought this would be a sure way to meet some local people and integrate more, but all the prenatal appointments were one on one with a midwife. My postnatal care was good, there are midwives for the mothers and separate ones for the babies, you have your own room so you can recover with the ‘peace’ of just your own baby (this was not private care). I was also given a prescription for 10 sessions with a physio to re-train my pelvic muscles…so can now jump on a trampoline! The other benefit, well hopefully for them that is although they have English parents they are bi-lingual, surely that can only be a plus?

Not benefits as such but a little history… with both of my pregnancies I had gestational diabetes that I had to control with insulin, but it led to very different ends….

My first got too big so they decided to induce her 2 weeks early, this, in turn, led to an emergency cesarean. At the time they kept the emergency bit from me and in-fact I only found out 2 years later during my first appointment with my second! Perhaps they didn’t want to worry me? Apparently, she was having breathing difficulties so they wanted to get her out, I figured it was 18h and the surgeon wanted to get home for dinner, well it is France after all… Something perhaps to be aware of is fathers are not allowed into the theatre for the operation, so you are on your own. I stayed in hospital for 7 days after, and the midwives were fantastic especially in the first few days when I was struggling to walk.

With my second she was smaller, so they left her to term. She was born very quickly 20 mins after my waters broke at home in a building site with no water into the arms of my husband! The pompier eventually turned up and then the paramedics. I was sent to hospital as a precaution…thank god! My stomach was very sore and a 6 km journey took us 40 mins as they had to go so slowly. My experience with the midwives here was not so good, but I discovered my French is quite good when in pain and angry. I was told off for not having delivered the placenta already (what did I know), surely the pompier/paramedics should have done this? Luckily however that they didn’t, I was in severe pain, worse than the un-expected drug-free birth. The midwife was very un-caring telling me not to be so pathetic, anyhow digress. Long and short of it is that I had haemorrhaged internally as she came out so quickly and I had a thin layer of skin literally saving my life. I was rushed into the operating room and stayed in hospital 10 days recovering. Said midwife did apologise a few days later saying in her career of 30 years she had never seen that before, well hopefully she has passed on her newly gained knowledge/experience to others.

I guess I just wanted to share that no two births are ever the same, but it is so important that you believe in yourself and what your body is telling you and to make yourself heard even if you shout it in your own language until they understand.

I was always terrified of giving birth, and I guess my main frustration was with myself not being able to communicate properly my feelings to the midwives and doctors.

I have no experience with my own country, so can’t really comment. Only real observation was after the births, it turned out my second was blw (I had no idea what that was before her), which they just did not understand at the creche so insisted on feeding her puree that she continued to spit out.

As I said above, listen to your body, and make yourself heard. For example, with number 2 I knew I was diabetic again but they wouldn’t listen to me before 5 months so I did the best I could to control it with diet before they would test.