When BiP was born it was decided that she would remain anonymous to the outside world. She was given the pseudonym of BiP (Baby in Provence) – she’s been anonymous for almost 9 years. BiP is Ziva.

For a couple of years Ziva has wanted her own YouTube channel where she wanted to do bilingual French and English toy demonstrations. It was her who wanted to be on the internet, so I said no.

It was a genius idea at first, but I was always too scared to release her to the the whole social media world where she would be torn down for everything. I also never wanted to use her for my own professional gain.
Social media is a thing, how we use is it key – kids have no place really but they have eyes and ears everywhere!

Every school and after-school activity asked for permission to share her photos and I said “no”…. I never realised that she would be singled out when it came to certain group photos because I’d ticked that box that said NO to photos. 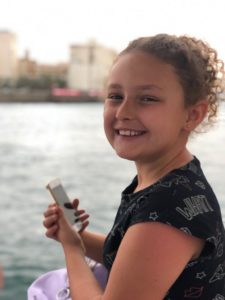 One day Ziva turned to me and said “Mummy? Do you not share my photo because I’m not beautiful?” – I died.

I’m not a crazy poster, I guess that working in social media will kill your appetite for it, but when Ziva asked for the 100th time after knowing all the implications and still be ok I had to honor her request. She’s still not allowed to have her own social media accounts but I’m going to stop telling her to turn around every time I want to share a photo with her in it.

So this now you can all see is my greatest achievement, my biggest challenge and my best teacher xx