Next up in the series of The Global Differences of Baby-Making I talk to Pauline who is French and had her daughter in the UK. Here is her story: 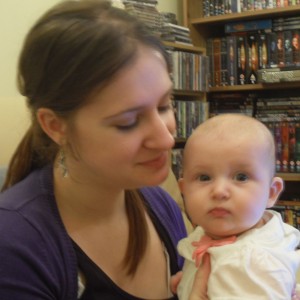 My name is Pauline, I am 31 and I am originally from France. I came to the UK when I was 18 to improve my English. It was supposed to be a year out but I decided to stay and I now live in Sussex with my half French-half English husband and our 4 months old daughter Emilie. She was born in England at our local hospital.

Why did you have your daughter abroad? What do you feel were the benefits to having children abroad?

I had my daughter in the UK because it is where we live. We never thought about having her in France as it would have been too impractical and my husband wouldn’t have been able to be there due to work.

I like the English attitude to pregnancy and birth. Unless there is a problem, it is a very ‘hands-off’ approach. I was referred to the community midwife who saw me once a month at first, then fortnightly the last trimester, and I had two growth scans at 12 and 20 weeks. I only saw an obstetrician when I was giving birth because it ended up being a ventouse and forceps delivery.

I was very relaxed. I didn’t expect to feel this way at all; I had a lot of misgivings about the National Health Service when I first moved to England and I wasn’t reassured by my subsequent visits to the doctor, whereas my experience of French medical care had been very good, especially access to specialists. But I am actually glad I wasn’t in France where pregnancy and birth are much more medicalised, as if being pregnant is a disease that has to be managed rather than a natural thing.

I had a choice about the kind of birth I would prefer; I wrote a birth plan and discussed it with the midwife. The worst bit was the hospital ward, it was hot and crowded and the food was inedible, but I knew this would be the case as it is the same in most hospitals in England.

I had heard that to reach their targets and to save money, midwives may try to dissuade me from having an epidural, but that wasn’t my experience. They do prefer for births to be as natural as possible but I was given one without difficulty when I asked. I could have chosen a water birth or a home delivery and this would have been accommodated as much as possible. This is not at all the norm in France, you might have to fight to have the birth you want.

It is also unusual to want to breastfeed in France, whereas doctors and midwives in the UK are very pro-breastfeeding, to the degree that if you choose to formula-feed, it can be difficult not to feel guilty. But the level of support differs widely from place to place and it is common for many women to give up breastfeeding after a few weeks. I had fantastic support. Whilst still in hospital, a lactation consultant showed me different latching techniques and helped me write a feeding plan for the first 4 days after the birth. There was a breastfeeding room on the ward where I was taught how to express as well.

Some people also look at me strangely when I say that I co-sleep, it is encouraged that babies should learn to sleep independently from a very young age and that I am ‘making a rod for my own back’ and she will still need me to fall asleep when she is 7 years old if I don’t wean her off it now. It seems to be quite a controversial practice but it is what works best for us however I don’t know if it is different in other countries. My sister who never left France still occasionally breastfeeds her 3-year-old and co-slept so I thought it was normal until I read otherwise on this website!!!

I was quite lucky that I am fluent in English so there were no language issues, otherwise my experience would have been very different. Read a pregnancy book, go on online forums to get another perspective and bring a list of questions to your midwife, otherwise they will just do the checks and leave you to it.