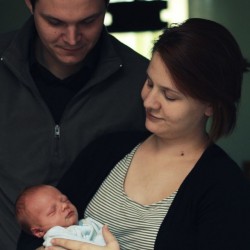 This week I talk to Amber as part of the series The Global Differences of Baby-Making. She had her son in France. Here is her story:

Tell me a bit about yourself? Where are you from? How old is your son and where did you have him?
I’m an American expat currently living in the suburbs of Lille, France. I’ve been in France for 5 years and I moved here to be with my French husband who is from Reunion Island. I have a 9 month old son named Victor and he was born here in Tourcoing, France on Nov. 30th.

Why did you have your son abroad?
We decided to have our son here because this is where we’ve made our life. My husband isn’t a native to “France Metropole” (continental France) either. We are more or less alone here and a baby had always been a part of our plans. Not knowing what the future holds for us, we decided to go for it now. We didn’t want to put it on hold just because we’re living away from our families.

What do you feel were the benefits to having children abroad?
In all honesty, having a baby in France seems to be much more affordable than having a baby elsewhere. I chose a private hospital and doctor, stayed for 8 days and was home hospitalized for three weeks, and I think must have cost something like 60€ total . We have been to the ER more times than I can count since he was born, had numerous tests run, and have never paid a cent for any of it. The health care system very much favors children. My son has a health issue and drinks formula that is very difficult to obtain and quite expensive, and because it’s a necessity it’s subsidized at 100%, meaning we pay about what we would pay for formula from the supermarket, and regardless of our income.

There are also benefits to raising children in France. Childcare is very affordable and maternity leave (although not well paid) was four months for me. I could have even chosen to stay at home longer. Comparable to my friends in the US who hardly had 4-6 weeks of unpaid leave, that’s a great advantage.

As an expectant mother abroad how did you feel?
My pregnancy was full of questions. I felt like (and still feel like) I have to fight in order to get doctors to listen to me and take me seriously. I chose my doctors very carefully and explained from the very first visit that I would be asking a lot of questions and expecting very thorough answers, which isn’t really the French way of doing things. There’s also the complication of not knowing how the system works, so not always knowing what questions to ask. In France you have to ask very precise questions to get the exact answer you are looking for. Over time I had to learn a lot of vocabulary which came naturally as my pregnancy progressed, but it wasn’t obvious at first.

I felt a lot of stress from women who’d already had children and were telling me things like if I hadn’t already booked my maternity, chances were that they were already full, or if I hadn’t found childcare prior to getting pregnant, I was out of luck and would likely never find anybody. I scrambled before the end of my first trimester to try and line up a hospital and a nanny, and in the end the scramble wasn’t necessary. 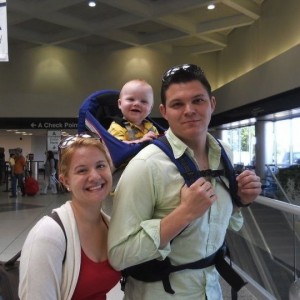 I also chose to continue working until four weeks before my due date. The recommended amount of time is six weeks, and most women take eight or more. I was made to feel like I was abusing my body and my baby for this decision, despite having my doctor’s permission. People would approach me and ask me if I ought to still be driving “in my condition” and perfect strangers thought that acceptable topics of conversation were things like my decision to have or not have an epidural, breastfeeding or not, etc., when otherwise the French keep very much to themselves and would have never tried to make playful banter with me if I weren’t pregnant.

I also felt like there is a stigma about pregnant women and maybe this exists elsewhere too. I felt like people were either looking at me encouragingly, or jealously. I chose to have my baby at a young age (I was 23 when I got pregnant) and the average age for a first baby in France is 30. Because so many women are waiting until they are older to have babies, there are many who are finding that it’s not always as easy to have a baby later in life, and thus the stares and the critical comments. My doctor even went as far as to ask me if “I really wanted to have this baby” or if “my pregnancy was intended”. I tried not to be offended, but in their eyes a 23 year old doesn’t choose to be a mother. What they didn’t know is that I’d been married for two years, we’d recently bought a home, and both my husband and I were employed and financially stable. Having a family had always been our intention, and my line of thinking was why not go ahead and do it now, while we have health and time on our hands? We wanted the process to be natural and stress-free. My goal was to be pregnant by the end of the year 2010 — no ovulation tests, no sitting with my feet in the air or any of grandma’s remedies, and we figured we’d need time in order for it to work out as we wanted. As fate would have it, my little boy was already in my arms as we celebrated the arrival of the New Year.

Did you encounter any opinions that would have been different in your home country with regards to your pregnancy or parenting choices?
Breastfeeding is very rare here. I know very few women who did it longer than 3 months, and I met very few doctors who were encouraging breastfeeding. I was told by a pediatrician that it was my fault that my baby was experiencing “failure to thrive” at two months because he hadn’t gained any weight. She claimed it was due to my “obsession” and “fixation” with breast feeding. I was neither obsessed nor fixated — nursing was something I did because I could, but I did not enjoy it and literally suffered through it. Other doctors claimed that it was due to my diet (i’m vegetarian) and that he wasn’t getting the nutrients necessary to thrive. I carried on until he weaned himself at 6 months (he’d been receiving bottles of formula while I was at work) and came to find out during the last month that he was allergic to milk proteins, and thus allergic to my milk AND the doctor-recommended formulas. Long story short — I felt as though French doctors are unwilling to look at the big picture and examine other symptoms, and are very quick to write you off as an obsessive new mom because that’s the easiest route.

At the same time that I was experiencing criticism from doctors for nursing here in France, I was getting backlash from people in the states or other Americans abroad about the way I chose to nurse. I was told that pumping, using nipple shields, or even creams, wasn’t “real nursing”. I had a hard time dealing with the people in my life who really had no clue what it was like to try and go out in public while breast feeding a baby in this country. It’s something you just don’t see, because people just don’t do it that often, and when you’re in a fragile, postpartum state of mind, it’s difficult to ignore all of the stares or comments around you. I think it may be easier to nurse in the states or in a country where it’s more common to encourage new moms to nurse.

It was also very difficult to get postpartum help for myself once my home hospitalization had come to an end. My doctor would say something like, “oh yeah, you can see so-and-so who works at the hospital.. she doesn’t have a direct line so you’ll just have to call and see.. she has very irregular hours and is hard to get in touch with…” which wasn’t very encouraging. With his doctors calling me “obsessed” for coming in to see them about his colic, and mine telling me “it’s very hard to get help”.. I didn’t (and still don’t) have a whole lot of faith in our medical system’s ability to provide good mental health care or emotional support to new parents.

What advice would you give other mothers in your situation?
I would advise home hospitalization, and I would advise asking for it because it’s not offered automatically. This was helpful because they’d come to the home every day to weigh the baby and show me how to do things that I couldn’t learn how to do at the hospital due to my C-section recovery. They’d answer any questions I had and were very attentive to my needs. I wish this could have continued in some form or other throughout my maternity leave.

It’s also important to be realistic. Having a baby away from your family and outside your country isn’t easy, and you need to be strong and have a good support system to get you through the difficult times when you have little to no comfort in your surroundings. I would recommend that you find a doctor who understands your unique situation and really listens to you. I would also recommend finding other women in your area that you can talk to, or friends that are supportive of your situation.