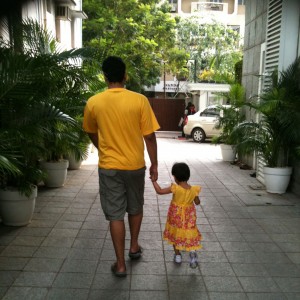 This week I talk nmaha who is Indian but grew up in Dubai and had her daughter in India as part of the series The Global Differences of Baby-Making. She talks about the differences and the similarities between having a baby in Dubai vs. India. Here is her story:

Tell me a bit about yourself? Where are you from? How old is your daughter and where did you her?

I’m a Chartered Accountant and currently run a healthcare business with my husband. Though I’m basically from India, I spent the first 24 years of my life in the Middle-East (Dubai) and still consider it my home. I have one daughter (she turned three in April this year) who I had in India.

Technically, India isn’t abroad for me, however, all the birth stories I could relate to were based in the Gulf. My mom had my brother there, 20 odd years back, and all my friends (the ones who had children at that point) had delivered their babies there as well.

I had initially planned to have the baby in Dubai, however, the logistics of having my husband there were too many and we finally opted for India as the more viable option.

Well, the one glaring benefit was the focus on a natural birth. Of all the stories I had heard, the common factor seemed to be that any delay in a delivery in the Middle-East resulted in an induction at a minimum or a C-section. They didn’t give the natural route too much off a chance. (I did end up having to be induced, but that was after two days of no progress.)

Well, back in Dubai most working women actually work till their delivery date. Expecting mothers also drive themselves around till they need to go to the hospital. It’s completely acceptable and even encouraged. In India, I was forced to work from home for the last month and a half, even though I refused to completely stop working. (What would I do with all that free time). Plus, I had to stop driving on the day my pregnancy was confirmed! I ended up feeling extremely claustrophobic and a little big smothered. 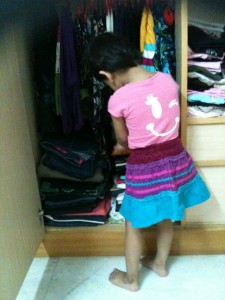 Like I discussed before the approach to pregnancy and parenting is a lot more wholesome in India. It’s an advanced version of the modern attachment parenting style. The doctors are also a whole lot more laid-back and prefer to let nature run it’s course.

I have a diagnosed back problem and on good days suffer from serious back-pain. Anticipating the difficulties of a natural delivery (which I wanted), I pre-warned the doctor that I would need an epidural and my husband even signed on the forms in advance. I was in labour for about 2 days and by the time they got round to putting in the epidural, it was too late to administer it. I had the most excruciating delivery back-pains.

The natural approach to parenting also meant that I wasn’t given much choice about breast-feeding. For seven months I exclusively breastfed my daughter with no supplements, not even water! Though it was great for mother-daughter bonding, I was physically drained by the end of each day. Plus, we followed an on demand feeding schedule that finally left me feeling depressed.

I also co-slept with the baby, which had me up at all hours worried that I would suffocate her, though I loved the extra cuddle time.

On the good side, with all that breast-feeding I lost all my baby weight within 6 weeks of delivery! I also had the benefits of a masseuse who came home everyday and a physio-therapist who helped me strengthen my post-delivery body pretty quickly.

People here expect the father to relax and visit the child at fixed times, rather than playing an active role in childcare. My husband had to jump over hurdles when he wanted to help me out and share some of the responsibility.

Do your research before you make any decisions on pregnancy, birthing or parenting. There are innumerable methods and options out there and every opinion has an alternative, even your doctor’s. Be a 100% comfortable with your choices and don’t let people tell you that the child is primarily the mother’s responsibility. Keeping it natural is great (and I wouldn’t have changed to much), however, there is no ultimate right or wrong way, each child and mother is different.

40 thoughts on “Having a Baby Abroad – Global Differences Series: INDIA”