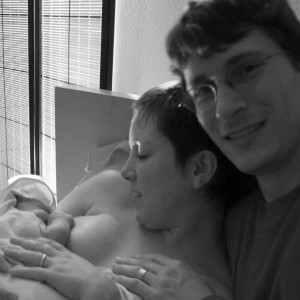 Next up in the series of The Global Differences of Baby-Making we go to Switzerland to hear Marcy’s story about having her first son abroad.

My name is Marcy.  I was born in Chile, but moved to the US (Texas) when I was 11 years old. My husband and I met in high school, and after dating on and off for about 6 years we got engaged at the end of college.  We now live in California and have been married for 7 years.  We have two boys– Donovan who is 3 years old and born at a birth center in Switzerland, and Quinn who was born in our home in California just over four months ago!  I’m trained as a Montessori teacher, though I now stay at home with my boys.  I write a blog (not as regularly now with the new baby, though I hope to get better about it again soon) and can be frequently found hanging out on twitter.

My husband had made it clear at his job that he was very interested in opportunities abroad.  So when his company bought a small business in Geneva, Switzerland, his boss came to him first to offer him the ex-pat opportunity.  We happily took it! We spent 18 months living in Geneva.  We had already been planning to try for a baby shortly after we would have moved, and we briefly considered putting the baby plans on hold while abroad but in the end decided to keep our “timeline” and see how things went.  As iut turned out, I got pregnant within a few months of moving to Switzerland. 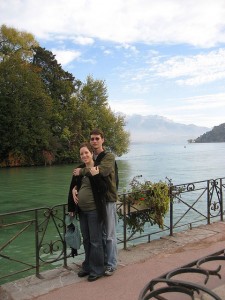 Marcy and her husband Zach in Annecy, France

I liked to joke that since we lived somewhere where we didn’t completely know the language, I got to skip all the unwelcome advice (and even criticism) often bestowed upon pregnant women!  Also, the Swiss tend to be much more reserved and respectful of personal space, so I avoided much of the strangers-groping-your-belly issue.  There were certainly a few aspects that were difficult, like being so far away from our families back home, and the language barrier was definitely there.  But I also discovered many positives.  For example, in much of Europe it is standard to do monthly ultrasounds at your prenatal appointments.  I now know that perhaps that many ultrasounds isn’t the best idea, but at the time it was incredible to get to see my baby every month.  Also, the attitudes towards pregnancy and what is or isn’t “allowed” were much more relaxed. In the US the list of “don’t”s (don’t eat this, don’t do that, etc) is a mile long.  In Switzerland, I was told to wash my lettuce very thoroughly, and don’t eat undercooked red meat.  That was it.  Pregnant women drank wine, ate soft cheeses, etc.  Also, I was always offered a seat on public transportation, no matter how full.  I loved that.

One big advantage of giving birth in Switzerland was a very positive experience with breastfeeding.  At least during the first few months, breastfeeding is highly encouraged and culturally supported.  I often breastfed my baby out in public, at sidewalk cafes, etc, both in Geneva and in France, without using a cover, and rather than odd looks or rude comments I instead received warm smiles of encouragement.  This was so great, as it gave me the confidence to not worry about offending anyone by nursing in public once we moved back to the US.  Also, when Donovan was born he developed pretty bad jaundice and had to stay in the hospital, under the blue lights for 2 days to treat it.  In many places in the US the doctors would have been pushing me to use formula to “help” with the jaundice, but in Geneva that was never even brought up.  Instead the nurses in the hospital were very supportive and encouraging of breastfeeding.

Many things.  Though as it was my first pregnancy, I didn’t have much else to compare it to.  I was pleased by things like not feeling like I had to be so paranoid about everything I ate or did as a pregnant woman.  I do remember feeling frustrated, though, at the highly medicalized view of childbirth in Geneva. I knew I wanted to give birth naturally, if at all possible, with few or no interventions.  I knew the US maternity system made natural birth difficult, but had expected that living in Europe would make my goal easier to accomplish.  Isn’t Europe so progressive??  What I quickly found was that some countries in Europe, and even the German side of Switzerland, are very supportive of and conducive to natural childbirth and even things like home and water birth.  The French side of Switzerland, however, and specifically Geneva where we were, were not. I searched and searched and could not find a birthing center in Geneva.  The hospitals, which were like 5-star hotels with incredible accommodations, were also rumored to have c-section rates as high as 50%!  I was happy enough with my OB until I finally, at 7 months pregnant, talked to her about labor and childbirth and options like moving about freely and pushing in different positions. She essentially told me there was no reason to use any position other than lying flat on my back on the bed.

That’s when I knew I wanted her nowhere near me or my baby during birth.

One of my other concerns about birthing in a hospital in Geneva was the language barrier. My French was good, but trying to talk about medical issues, let alone while in labor, was not something I wanted to deal with.  While most doctors in the hospitals spoke English, it was a complete luck of the draw on whether the nurses or hospital midwives would (when we did end up having to stay in the hospital with my son for his jaundice, we found that almost none of the nurses spoke English).  Miraculously, it was about that same time that I finally discovered a small birthing center just outside Geneva.  I met with that midwife (who spoke perfect English), toured the center, and transferred my care to her for that last month or two of my pregnancy.  Best decision I ever made!  It was such a relief. 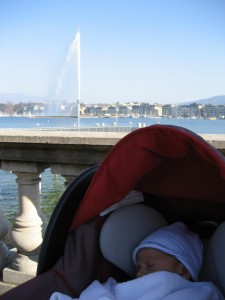 That’s the funny thing, I had expected it to be different but other than things like monthly ultrasounds and blood draws during pregnancy, many things were similar– too similar.  I have no problem with hospitals or modern medicine, I have been very glad to use them when needed (like when my son had jaundice, or later when he developed a UTI at 2 months old!).  However, I quickly learned that just as in the US, hospitals in Geneva were not set up to be conducive to natural labor.  I’m quite certain I would have needed an epidural had I given birth in the hospital, since they were not set up to help you cope with labor in alternate ways (like labor tubs).  Instead, at the birth center I had plenty of space to move and walk about freely, and also had a large bath tub where I spent most of my labor because it made such a difference in easing the pain of contractions.

One thing that was different, which I mentioned above, was the attitudes towards breastfeeding (in the US we *say* we support breastfeeding, but the practices of most hospitals and doctors don’t really, usually out of ignorance more than anything– nurses and doctors get almost no training on breastfeeding and often unintentionally end up spreading myths).  I was very glad for that support.  Also, circumcision is still routine in many places in the US but not so in most of Europe, so opting to leave our son intact was simple.

One amusing difference in thoughts about parenting is that the Swiss seem to have an obsession with drafts and cold air.  Babies are NOT to be exposed to any drafts!!  It apparently makes them very, very sick.  Donovan came down with his UTI, my neighbor (a lovely, wonderful older woman) told me it may have been because we don’t always put shoes on him when walking outside and his feet probably got cold.  My husband and I still giggle about that one. ; )

Do your homework!  When I interviewed my OB I asked her about birth practices and she waved my questions away saying we’d talk about it “later.” Well, later turned into realizing at 7 months along that my OB and I shared VERY different views on giving birth.  It would have been nice to discover that sooner.  If you are abroad and decide to give birth in a hospital, but worry about the language barrier, that’s one more reason to consider hiring a doula (I would have done that if I’d had to use the hospital after all).  Mostly, and this goes for any pregnant woman really, is to research and decide early on what kind of birth you want to strive towards, and find a labor support team (OB/midwife/doula/etc) who will help you achieve it.  Things may not go according to plan, but if you don’t plan and prepare to begin with then there’s very little chance things will go as you want.

Also, for anyone living abroad but especially those who are pregnant abroad– find an ex-pat group to be friends with.  I found a group of English-speaking women (from the US, Canada, England, etc) while still pregnant.  They were a great help with knowledge and support, from everything from breastfeeding to which shops sell what specialty parenting item.  Also, if I hadn’t met the group while still pregnant, I may have never actually made it out to the weekly meet-ups with a newborn.  It was so, so helpful to have that group of women, a few of who I still keep in touch with.

11 thoughts on “Having a Baby Abroad – Global Differences Series: SWITZERLAND”