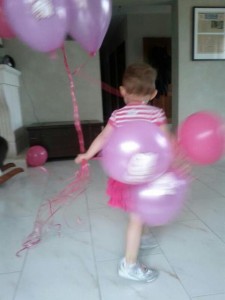 I can’t believe it’s been 2 years since she arrived and changed our lives forever.

To celebrate I’ve decided to write her a letter, daddy did it last year!

In a few years she’ll be able to read it for herself.

To my darling BiP!

I had no idea you’d change my life so much. You are my shining light. You are truly my proudest achievement!

You are a little girl now. No longer a baby.

And what a character you have! You are really cheeky monkey. You are fearless and agile, you clearly get that from your Daddy.

You speak more now, mostly in French which means I have to get up to speed with my own French. You understand both English and French perfectly which is astounding how you are bilingual already!

Your smile is infectious – your chipped front tooth horrified me at first, but now it suits you. In a few years it will fall out and I hope you take better care of your new tooth 🙂

You still have barely any hair – it looks like it will be really curly. I blame myself because I saw a 2 year old with the same amount of hair when I was pregnant with you and commented that it was a bit odd. LOL!

Over the last few months you decided you no longer wanted to wear diapers – I guess all the Elimination Communication paid off as you made the decision to only wear “pantpies”.

You are a serious foodie like your parents – perhaps it’s thanks to Baby-Led Weaning. The more spiced up the better for you even if you demand “burger’ and ‘baby-pasta” all the time.

To the horror of a few you are still breastfeeding. You decided on your 2nd birthday that you prefered a book over a cuddle and feed with Mummy. That’s ok, you are growing up. I am delighted that a year on that we can still say that we will wean when WE want to. Although I think you will probably decide before I’m ready. When that day comes I am ready.

We love you more than words can ever describe. 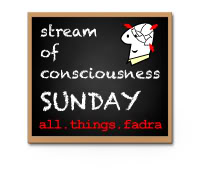 We only speak English at home. All BiP’s books are in English, all her DVD’s are in English but obviously when we are out and in French speaking company we speak French.

At 17months BiP is saying a few words. What has become apparent is that no matter what we try to drum into her as the word for this or that she will use the word that is most applicable and relevant to her.

DaddyinProvence wanted to be called “Papa” but to BiP he is “Daddy” and she says it so perfectly it makes my heart melt.

I want to be Mummy, not Mum, not Ma, MUMMY. And what does she call me? “Maman” which is the French for Mummy and I hate it. It drives me nuts.

Other words include “Ka-ka” which she uses for “Poo” – in France they say anything dirty is “ka-ka” and obviously poop is “ka-ka” also – I guess it’s easier for her to say that than Poo-Poo but it still gets me.

Don’t get me wrong, I LOVE the fact that she will be bilingual without even realising but since I struggle so much with French I find it bizarre that MY baby is speaking French.

The other day she said “Encore” instead of again … I was taken aback.

English still has the upper hand so I still feel like I am in charge 🙂 She waves and calls “Bye-Bye” so beautifully that even the most hardcore French speakers will follow up their “Au Revoir” with “Bye-Bye”!

Anyone else experienced the same thing with their bilingual baby?

Today I stumbled upon the Stream of Consciousness Sunday series. A 5 minute brain dump of words! A fabulous idea!

We live in France, my French is terrible, I’ve been here 2.5 years and I hoped within the first 6 months to be fluent! Oh how my expectation crashed and burned! I made terrible mistakes and still do. I found myself resigning myself, in conversations to smiling politely and nodding often at the wrong time! BUT! What a wonderful opportunity for BiP!

When I got pregnant we were already living in France, my husband accompanied me to all my doctors appointments to help me understand the bits I missed and to help me communicate – I have no idea how I would have managed without him. When BiP was born that was when the questions about what language we would speak to her in. “In English of course?” I would reply. We speak English at home, anything else would be unnatural. My priority is to give her the richest language experience I can offer and French is certainly not that. So English it is.
BiP already, at 12months, understands both English and French. She doesn’t say much but that is to be expected.  She certainly smiles upon receiving glowing compliments when we are out and when someone says “Au Revoir” she waves bye-bye.

I am always irked by the monolinguals, in France, who criticize the fact that we speak English to BiP. “Well, you live in France, you MUST speak French to her” is what I am often faced with. How can I possibly do that? The other day I told someone I could F*&% the price on something rather than lower it – a simple mistake in pronunciation as the former is baiser vs. the correct word baisSer!!!  What kind of example would that be?

I have no doubt that BiP will speak French at school – ok, she may lack certain vocabulary and may struggle for the first few months but at age 4 is that really a problem? Some think it is. I tend to ignore such opinions and carry on. I know there will come a day that BiP’s French will be better than mine and I will be scouring the internet looking up what she will have said but that’s fine. She will speak both languages without effort and the world will be her oyster, well, a lot of the world.

Right now, given that English is rarely spoken in the part of France that we are in, is to find a network of like minded parents who speak English with their children to ensure that when BiP does go off to school that she’ll also be exposed to other English speakers.

How are you dealing with raising a bilingual baby?