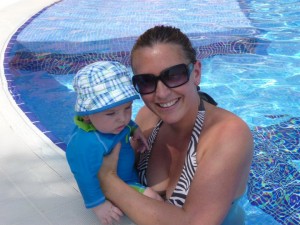 It’s back to the United Arab Emirates this week as part of the series The Global Differences of Baby-Making to hear Catherine’s story about having her son in Dubai.  She talks about feeling nervous about being abroad, the benefits of private healthcare and the differences between Dubai and the UK. Here is her story:

Tell me a bit about yourself. Where are your from? How old is your son, and where did you have him?
I’m 32 years old, from the South West of England – a village in Weston-super-Mare. I grew up in Oslo, Norway. My son William is 13 months and baby number two is due in November. Will was born in City Hospital, Dubai, and hopefully our second will be born there as well with the same obstetrician.

Why did you have your son abroad?
We had Will in Dubai as, for the moment, it’s home for us – I’ve lived there for ten years and my husband for six, and we never really considered having him anywhere else. While I’m sure healthcare in the UK is first-rate, my sister had horrendous birth experiences with her first two children and I’ve often read maternity care is an area needing some attention thanks to understaffing and over-stretched resources. We did also feel going back to the UK to have our baby would have been cheating, as neither of us has contributed to the country for some time and we’re no longer eligible for NHS care (and quite rightly so).

As an expectant mother abroad, how did you feel?
I was nervous about having our baby abroad as I knew I wouldn’t have my immediate family to hand straight away, but as it happened Mum was over on holiday when my doctor decided to induce so that was a stroke of luck! I did feel somewhat isolated, though, and distanced even more from my family at a time when I would have liked to have been closer to them, especially since my sister already had two children and was pregnant with her third. 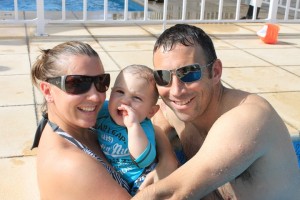 Catherine with Will & her husband

Given that my healthcare in Dubai was private, I was concerned that I might end up undergoing tests or procedures that weren’t strictly necessary purely for money-making purposes, but again my choice of doctor reassured me, as she had worked in the UK for a number of years before relocating to Dubai. I was also very concerned I might be pushed into a C-section (I wish I had been now!) but she was very supportive of my wish for a natural birth. I found that pretty much anyone and everyone had an opinion – something I doubt I’d have encountered in the UK – and they weren’t frightened to share it. I never expected to have to defend my choice of not having an NT scan over the coffee machine in the office! I also found some of the medical professionals (and I use that word lightly) somewhat less than subtle in their manner; the doctor who did our anomaly scan at 20 weeks announced that I must have pregnancy diabetes as ‘baby is fat’. Er, OK.

What do you feel are the benefits of having a child abroad?
As healthcare in Dubai is mainly private, one of the benefits was a lovely modern hospital with private rooms. Superficial, yes, but I’d imagine having to be in a ward with other women after one of the most traumatic experiences of my life would have been a little less than ideal! Another benefit, especially for me, was that my maternity care was entirely the responsibility of an obstetrician, whereas at home I may only have seen someone this senior in case of any problems. I had pre-eclampsia and a difficult delivery thanks to being induced, and I was very reassured to have a specialist taking care of me. Not that the midwives weren’t excellent – they were beyond excellent – but I hadn’t had the easiest of pregnancies and I was grateful for the extra level of care.

Did you encounter any opinions that would have been different in your home country with regards to your pregnancy or parenting choices?
I’d say to others in our situation, find yourselves as much of a support network as you possibly can. I managed to meet up with a group of mums-to-be all due around the same time and found them invaluable – we were all so supportive of each other, we really did take the place of family when family simply couldn’t be there. We still keep in touch now and two of us are pregnant again. And one more tip; if you do have any doubts about the care you’re receiving, see if you can find out what would happen back at home. Having my sister at home who’d been there and done that, so we could compare, was great for me but I also managed to find information on NHS websites and through other online resources to put my mind at rest.