Next up in the series of The Global Differences of Baby-Making I talk to Katie who is British and had her first son in the USA and her second in the UK. Here is her story: 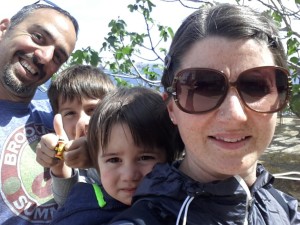 My eldest son was born in the USA because that’s where we were living at the time and the same goes for Oliver and the UK.
What do you feel were the benefits to having children abroad?

Jack is eligible for a US passport which, having been through the process of trying to get a job in the US when not a citizen, is certainly a bonus! Other than that, I don’t think there were any ‘benefits’ to having him in the US over the UK. It was certainly a lot more expensive!!

Now that we are raising our sons in France I would say that the major benefit is that they will grow up to be bilingual. I think that this will give them great opportunities in life. The lifestyle in the South of France is much more laid back than in the UK or US as well and the weather obviously is a bonus 🙂
As an expectant mother abroad how did you feel?

I was a first-time mum in the US, so language wasn’t a problem luckily. I think that the biggest thing for me, was being so far away from family. However I had friends that kind of filled that gap and helped out when I needed them.

With regards to the healthcare, it was completely doctor-led which is very different from my experience the second time around in the UK. As a first time mum I personally found this reassuring, although if I had been in the US for my second pregnancy I don’t think I would have wanted it this way. I also appreciated the 2-day stay in hospital, in my own private room, before I had to go home and face ‘reality’. Also, did I mention the cost??? Even though we had insurance we still had to pay a LOT of money!!

Second time around, although I was in the UK it was my first experience of having a baby there and things were very different. The only reason I saw a doctor was because I had a low-lying placenta, otherwise everything was handled by a midwife. I was able to give birth in a birthing centre, rather than a labour ward, and things were much more relaxed and laid-back. I was more relaxed anyway due to previous experience and laboured at home for the majority of the time but once in the birthing centre my midwife spent most of the time in the corner of the room observing and letting me do my thing! Incidentally, she was French and even offered to let me practice my French – I didn’t take her up on the offer! My son arrived at about 7.30am after a 5 hour labour and I was home by lunchtime! I can see how the speed of this discharge would daunt a first time mum but as I wanted to be home when my older son cam e home from school I loved it. Plus I could shower in my own bathroom!

The only main difference was the hands-on ‘medical’ treatment of the pregnancy and delivery. In the US I definitely felt like my pregnancy was treated as a medical condition whereas in the UK the attitude was quite the opposite. Otherwise attitudes towards our parenting choices are much the same in the US and the UK. I breastfed my older son for a year, which is quite a long time compared to most women in both countries, I suppose. I am still breastfeeding my second son, who is 20 months, which is definitely quite unusual for both countries and even more so now I live in France!. Information and services about breastfeeding and help with breastfeeding were much more readily available and advertised in Portsmouth, the city I lived in in the UK compared to where I was in the US. I am sure the information is available in the US too, but it wasn’t made as easily available. In Portsmouth there are free support groups every day of the week that mums can attend and peer supporters who will come to your home to help, if necessary.

Second time around we have been much more laid back but most of our parenting style is the same as when we were first-time parents. I don’t know how my ‘style’ compares to that of French mothers really, but I don’t seem to stick out like a sore thumb too much – other than the fact that I am the mum yelling in English to her kids outside school rather than French! I still carry my, admittedly rather large, toddler in a sling sometimes and he still ends up in our bed at night but they are not things that make big differences in the grand scheme of things.

I would say do lots of research, meet as many mums and expectant mums as possible and follow your gut. Listen to everyone’s advice and use all of it, some of it or none of it depending on what works for you and your family. There is no ‘right’ way to prepare for a baby or parent a child – do what feels right and always push for what you want.