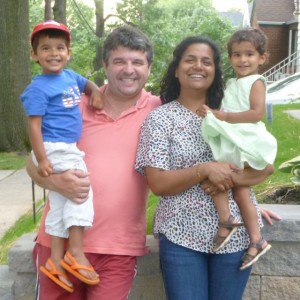 This week I talk to Shweta who is originally Indian and had her children in the USA and now lives in Belgium as part of the series The Global Differences of Baby-Making. Here is her story:

I am Shweta. I was born and raised in India for the first 16 years of my life. My socialization has been American as I spend the next 15 years of my life in New Jersey, USA. I have a three-year-old son and a two-year-old daughter, whom I had in the U.S. Currently, we live in Belgium.

The decision to have our children in the U.S. was an easy one for us. We were in the U.S. and were assured that we would be given the kind of care we desired. The benefits of having our children in the U.S. have been handful. We were able to give birth in clean facilities and were able to stand up for what we wanted, which at times was against hospital protocols and policies. For example, breastfeeding exclusively being one of them.

Throughout my pregnancy, I thoroughly focused on moderation and made conscious effort to avoid any extremism. I was, however, adamant about allowing nature to take its course rather than falling prey to the constant emphasis on ultra-sounds, induction and so on. During my second pregnancy, I noticed that the preventative treatments prescribed seemed to have an underlying fear of being sued rather than a genuine focus on the necessary care.

Both of my pregnancies were filled with big issues made out of minuscule problems. Initially, each month with our fingers crossed, my husband and I would head to the local hospital to get the prescribed ultra-sounds done. Over time, we realized that the motivation for such care was weak and ingenuine.

Being married to a Belgian and being the only woman in both families who had children in the States, I constantly heard the Belgian, Indian and the American way of handling pregnancy and parenting. For example, while my husband wondered why I was required to be induced one week before my due date, my parents dismissed the idea of ever questioning the doctor’s motives (the doctor was scheduled to go on vacation three days before my due date).

With three cultures (Indian, Belgian and American) rigorously playing a role in our day-to-day lives, parenting strategies are constantly addressed in our household. It was surprising to my Indian family, how involved fathers are in the upbringing of a child. Parenting in the Indian culture is a community effort where distant family, friends and even acquaintances have a say. On the other hand, parental role is very well-defined in the Belgian culture. Overtime, we came to an agreement that each of us focus on the best interests of the child rather than on our own face-value and the societal expectations. This helped reduce the number of clashes.

My advice to multi-cultural couples is to consistently communicate “best practices” of parenting in each of your cultures. Every culture presents a unique perspective on parenting and when discussed a middle ground can be found on what works best for your new family dynamic (you, your partner and child alone). Also, it is important to remind ourselves that we are the parent and not the child. Hence, making this journey about the child rather than about dealing with each other’s insecurities.

About Shweta:
After being an immigrant in two countries, she is working on a blog to help understand immigrants and their quest for a better life. Since three languages are spoken in her home daily, mixture of Indian and European foods cooked each day of the week and language misunderstandings are just part of her life, she fondly calls her family a “culture jungle.” She and her husband with their two little ones recently moved to Belgium from the U.S. You can read her endeavors at http://culturejungle.eu