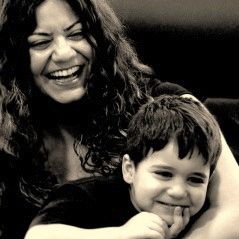 Next up in the series of The Global Differences of Baby-Making we go to the United Arab Emirates to hear Rouba’s story about how she had both her son and her daughter abroad. She talks about recently having a water birth in Abu Dhabi which is almost unheard of and how it’s important to believe in the most important thing mother’s posses; instinct.

After having spent most of my life moving from place to place, I came to the conclusion that even though I was originally Lebanese, I am in fact an international citizen! Unbound by any ethnic or racial background or limited by it for that matter… I have two kids: Omar, six years old and Naya, 2 months – both born in the United Arab Emirates (UAE) – one in a regular operating room in Dubai and the second in the bathtub of a hospital in Abu Dhabi ☺

Why did you have your children abroad?
Like a lot of Lebanese people, I have had to find my fortune outside Lebanon where instability and constant turmoil prevail, and spend my life reminiscing over how beautiful my country is! I now live for my short holidays back to savor the beauty, the food and the weather for a few short days! It’s not that bad – I’m kind of over it now… so are the other 12 million Lebanese living abroad ☺

Living abroad means convenience of breeding onsite… No use in going back home to deliver if the pregnancy is stable and there are no complications. Had there been any issues then I would have probably felt safer in the hands of a skilled Lebanese doctor back home… There was also the factor of practicality, I’m a working mother and disconnecting for long periods of time is not really an option, but again, it’s ok – I’m kind of over it now ☺

One of the key reasons I didn’t need to be back home for my second delivery was that my courageous doctor in Abu Dhabi was prepared to help me have the waterbirth I had always dreamed of! Yes, epidural-free birth… I know what you’re thinking… “Why would anyone deliberately take the pain!” Well, I wasn’t up for it the first time I became a mother even though I had the intention to… It just didn’t happen… Given that my husband and I planned to only have two kids – it was now or never… !

Did you encounter any opinions that would have been different in your home country with regards to your pregnancy or parenting choices?
When you say waterbirth in Abu Dhabi, Dubai OR Lebanon even the entire region here, it’s pretty much uncharted territory… In fact, none of the doctors, relatives or friends I spoke with encouraged it. They all made me feel reckless and irresponsible to even consider the option and here I was struggling with the decision… My thought was that women have been having their babies at home for centuries with midwives and without hospitals, doctors or nurses so why on earth couldn’t I have my baby in a small kiddy pool at the hospital itself under the supervision of a qualified medical team who could intervene at any point? I was determined… And the more people discouraged me, the more I became adamant to go where no Lebanese woman had gone before… ☺ I felt like Neil Armstrong about to step on the moon!

As an expectant mother abroad how did you feel?
Sure, I had my fears and concerns but when my doctor agreed and confirmed that it would be a safe option considering I was having a healthy uncomplicated pregnancy – I was ready! I watched at least 100 videos of waterbirths on youtube and felt so empowered I could open my own birthing clinic! 😀

I had to mentally prepare myself for the day and even though my labor began two days ahead, it was amazing to watch as my body started getting accustomed to the pain… I witnessed as my threshold for tolerance increased over the two days and by the time my cervix was ripe and at 2.5 cms, I was able to do some last minute shopping… I had to break every three minutes to breathe through the contractions but hey, I knew the pain was gonna get really bad eventually and so I tried to pace myself… It worked… I even suggested going home and resting for a while but my doctor wouldn’t have it, he knew that day was D day and he didn’t want me to give birth in my living room!

Once at the hospital, it was indeed confirmed that I was in labor… the contraction monitor was flickering over the 100 mark at a time when I my contractions had started off at 20/100 two days earlier and slowly built up to 50/100 that same morning…

I had been pacing up and down the corridor and had began crying through my contractions when we all decided it was time I got in the tub… The minute I felt the warm water, I felt so much better! It’s amazing what the water did for me and the only time I felt like crying again was at 8 centimeters – literally minutes before Naya came out!

What I found amazing was that my natural instincts that just came into play… The last time I was giving birth, I was numb the waist down and needed the doctor to notify me when the contractions were coming in… This time around it was different… At some points I felt the desire to rotate my waste in the water and that reduced the pain a little… I was taking deep controlled breaths… Yes I was in pain; I’m not forgetting that part! But there was an elevated side of me that was fully focused and in control… The doctor was coming in and out of the bathroom to check on progress and it was at my call that we began the pushing process… Effectively, after 3 hours in the bathtub, it took two major pushes and my baby was out… What a feeling! I felt her every millisecond of the way… It was beautiful… I felt so strong in that moment… The second she was out, the pain vanished almost magically! Again my body guided me when it was time to push the placenta out and it was on my call that it happened…

What advice would you give other mothers in your situation?
I think if this experience has taught me anything it is to trust my instinct as a mother and just ignore what people say and that includes close family and relatives! Surely, I’m not referring to unrealistic expectations especially when a medical condition is involved or any complication whatsoever… In these instances it is best to seek and follow medical advice… In the absence of such challenges, women have a built-in mechanism that just “knows” what to do… We just have to trust in it enough to follow it… Everyone was against me doing this waterbirth but it’s ok – I’m SO OVER IT! ☺

← Baby Bikini Babes: Should such advertising be banned?
Baby-Led Weaning guide to spoons →